When the first settlers arrived in this part of Carroll County in 1831, there were no roads, only Indian trails, over which roamed the Miami, Potawatomi, Thorntown, Mississinewa, and Eel River tribes.  Settlers cut traces wide enough to allow their wagons to pass through the dense forest.  The crooked roads which lead to Adams Mill zig-zagged around large trees, and around fallen trunks, creating jogs in the road.  The roads along Wildcat Creek generally followed the high ridge, also in a very irregular line.

Settlers established early communities along streams and rivers because of the water supply and ease of transportation. A favorable mill site, however, one with a sufficient flow of water year round, influenced the particular location of many settlements. Adams Mill became the nucleus of the 1837 platted community of Bolivar and was essential to its economic development. The 1835 grist mill and earlier saw mill were replaced by the present 1845 structure and an 1865 saw mill which no longer exists. It was the focal point of settlement life and livelihood, even though the name Bolivar was discarded for the more descriptive “Wildcat.” While waiting for grain to be ground, the settlers told stories, played games, fished, collected mail, and argued politics. In early days, news arrived via the stagecoaches which ran nearby between Lafayette and Burlington.

The map above of Carroll County in 1863 shows the route southeast from Delphi via Flora and then south coming past Adams Mill and on through Lexington. In 1872 when the Adams Mill Covered Bridge was erected (the present span at that site), it was decided to place it just north of the Mill at the ford rather than near the ford at the dam, because more traffic came from the north. The early covered bridges were constructed on main arteries only, often near a mill or on a toll road, and this area was no exception. The Adams Mill Covered Bridge is also on the National Register of Historic Places.

The same map also shows roads to Adams Mill, including one that angles southeast from the western part of Monroe Township that would bring people from the old Zion neighborhood in Madison, Deer Creek, and Monroe Townships, on down to Adams Mill. This road merges with the Delphi-Burlington Road just above the covered bridge. Zion Cemetery is all that remains of the Zion area, but in the past there was a large steam sawmill, a school, Zion Church, and Sugar Creek Baptist Church in what was called the Zion neighborhood. There were never any grist mills in Madison Township or southern Deer Creek Township because there was no adequate water supply. In the Flora area, there was no grist mill until 1876, and it was small and steam-driven.

The Delphi-Prince William-Frankfort Plank Road was a heavily-traveled toll road southeasterly just to the west of Adams Mill but it provided access to smaller roads which went to the Mill. The Lafayette-Burlington east-west State Road goes through Prince William and Lexington, near the Mill. This was an important stagecoach route that crossed the north-south stagecoach route on the 1832 Michigan Road a few miles away at Burlington. The Michigan Road ran from Madison to Michigan City.

A road from the south and west through Pyrmont followed the Wildcat Creek and crossed at what later became Cutler, passing just south of Adams Mill. Pyrmont in Clay Township was an important intersection of the Delphi-Dayton State Road and the Lafayette-Monitor-Pyrmont Road. A recorded account of 1828 settler Alexander Murphy just east of Pyrmont told of his travels to Lafayette for grinding grain for his distilling operation before local mills were constructed. His still on the Wildcat required a steady supply of grain, and he was an important mill customer.

Later stories report flour being shipped from Adams Mill by road and railroad in all directions to stores, particularly the fine cake flour that was a specialty of Adams Mill. It supplied 11 Central Indiana bakeries. It is also recorded as supplying 16 tons of corn meal on one order.

Roads extending into Clinton County from Lexington and Prince William made Adams Mill accessible to patrons from an area that was otherwise unserved except to the far west by a mill at present-day Edna Mills. It is also documented that the early settlers of Howard County and the Kokomo area traveled to Adams Mill because their first grinding facility wasn’t erected until the 1840s, and their mills didn’t operate in the winter. Their next closest winter source for grinding was substantially to the north in Logansport. Adams Mill was also uniquely flexible in that it could grind corn and wheat simultaneously, using separate turbines.

The Adams Mill settlement included a blacksmith shop, general store, woodworking shop, and sawmill. Samuel Weaver ran his wool carding mill from Adams Mill power until he moved to Cutler. The Wildcat Post Office was located in the Mill, and the Wild Cat Masonic Lodge met at the Mill from 1864 until 1867 when it relocated to the neighboring store. In Democrat Township nearby were two stave factories and three cooper shops which no doubt supported Adams Mill with barrels. The Mill area was so important in the county that it was featured in an intricate engraving in the 1874 Carroll County Atlas. 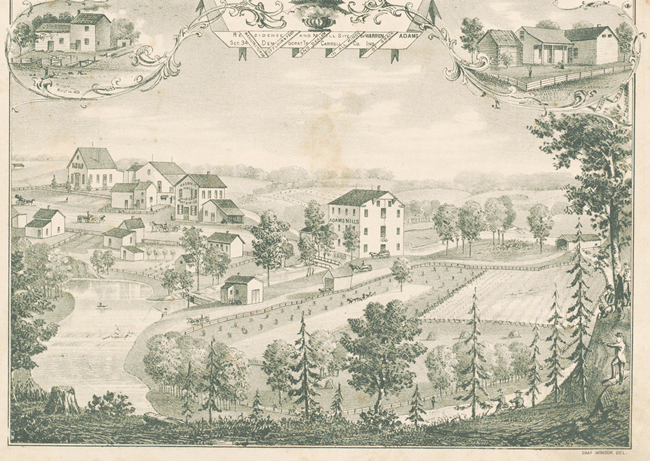